• Premiered at the big scene of the Macedonian Opera and Ballet

• The most visited live event at the Skopje Biennale 2009

• The sound recording and mixing was done with binaural techniques; the sound projection via a loudspeaker orchestra 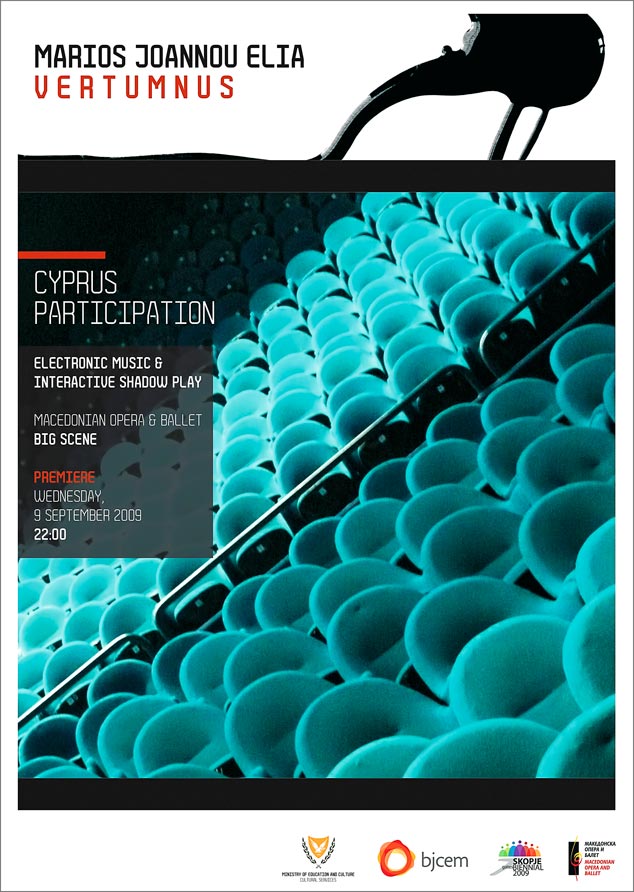 According to Ovid’s “Metamorphoses”, Vertumnus (whose name is created through a transformation of the words verto, unus and omnis: “one who changes himself into all”) tricked Pomona into talking to him by disguising himself as a motherly old woman and gaining entry to her orchard, then used a narrative warning of the dangers of rejecting a suitor to seduce here. On the one hand, the enclosed quality of Pomona’s garden should suggest safety and protection, but when Vertumnus gains admission to her orchard, it serves to heighten our sense of her isolation and helplessness. On the other hand, the protean character of Vertumnus makes him a perfect figure for Satan. Just as Vertumnus dons a succession of disguises appropriate to a rural setting in order to approach Pomona without causing alarm, Satan assumes the form of various creatures in the garden, i.e. he manipulates his appearance in order to deceive (he appears as a serpent to tempt Eve with the powers of the forbidden fruit), so that he can stalk his prey inconspicuously…

Any transformation or manipulation of the human face attracts attention, but the effect is accentuated when we are confronted with monsters. “Vertumnus” is the title of Arcimboldo’s portrait of Rudolf II re-imagined as the Roman god of metamorphoses in nature and life, with Rudolf’s face composed of fruits, vegetables and flowers. The portrait creates the illusion that we are looking at parts of the body when Arcimboldo is really showing us spiked ears of June corn, pea pod eyelids and a gourd for a forehead. Rudolf II looks less like a king than a crudité platter. Arcimboldo’s paintings stimulate opposing, irreconcilable interpretations of what we are seeing and thus are paradoxical. The poet Comanini speaks about the two sides of Arcimbolodo’s caprices, namely the artificial and the natural: Firstly the painting of “Vertumnus” is like a Silenus, and then that it is like a monster, hiding a regal image within. Hence the portrait of Rudolf II can be interpreted as an artistic monster and as such a natural monster is a caprice of nature…

“The authentic music contains a gestuculatory plasticity, is detailed in its shaping and eclectic in its content”

Commission: Republic of Cyprus – Ministry of Education and Culture.

Big scene of the Macedonian Opera and Ballet, Skopje.

On Music Production: KSP scripts were applied straight into the programming of the Kontakt sampler in order to assign an entirely different concept to the traditional effects. The manipulation of all parameters were thereby facilitated at a microscopic level, creating new behaviours, timbres or even generative sequencers. Recordings and the mixing stage was done with binaural techniques.

VERTUMNUS at the Biennale of Young Creators

A modern opera, written by Marios Joannou Elia, premiered at the Biennale of Skopje

“Vertumnus”, the latest work by the young Cypriot pioneer composer Marios Joannou Elia, had its world premiere on September 9 on the main stage of the Macedonian Opera and Ballet in Skopje. Nicolas Elia, the producer of electronic music, collaborated in the creation of the sounds. This work was chosen by the Ministry of Education and Culture’s committee of specialists to represent Cyprus in the music and spectacle field of the 14th Biennale of Young Creators of Europe and the Mediterranean in the town of Skopje, in which 700 artists from 46 countries participated.

The fact that Marios Joannou Elia was the only artist whose work was programmed by the organisers for the specific venue is particularly prestigious for the composer, considering that it is the most important and the largest stage in the country, the Former Yugoslav Republic of Macedonia. After the premiere of the work which was warmly applauded by the very large audience, the composer received the congratulations of a plethora of representatives from the other participating countries.

“Vertumnus” has been created musically in such a way that it is projected by an ensemble of loudspeakers surrounding the audience. In addition, a composite active theatrical setting which links real/live and video-recorded shadows with beams of light gradually excites a series of illusory visual compositions. The work uses applied interactive technology to process and simultaneously produce the sound and visual elements of the live performance.

The visual content of “Vertumnus” derives from elements of shadow theatre but reorganised and shaped autonomously. Thus a personal, contemporary performance is created, which is based morphologically on the musical composition. The music combines electronic and natural sounds, creating an audio-drama. At the same time the music suggests to the listener audio “theatrical windows” which are a creation of a series of selected, imaginative combinations of sounds. For this reason the listener finds himself in a fantastic, linked expression of sound happenings which border on the experience of a horror film.

The result is not a programmed or explanatory music but a series of dynamic complexes of sound which move and circulate within the space by technical means. The authentic music contains a gesticulatory plasticity, is detailed in its shaping and eclectic in its content.

Although Marios Joannou Elia initially planned a more technically complicated work e.g. with disproportionate and large scale projections in a three dimensional conception, this was not possible because of financial difficulties and technical limitations. Despite all this, he finds that in “Vertumnus” he has discovered new and impressive possibilities of performing contemporary music with visual means and which he hopes in the future he will be given the opportunity to use to the maximum extent. (…)