How acoustics, sounds and noises influence our everyday life, give value to our experiences and ultimately become a significant paradigm shift in the onset of creativity

I’m a composer and creator of contemporary cultural events. Usually, people think of a composer as somebody who has direct contact with music; and more precisely, with organised musical sounds, music scores, musical instruments, concert halls and stages. This is not the exact case, though; at least with me.

To clarify this, let me take things from the beginning, my childhood. At that time, I was simply a passionate listener. A listener who wasn’t though listening to music on the radio and TV or recordings on tapes and LPs. To be honest, I did not have this privilege since as refugees the only asset we had was four walls and a roof. Also, I was growing up in an environment where, compared to other European cities, music education and concerts were extremely limited to non-existent. It totally felt like being in a musical ‘desert’.

But still, I was a listener; a passionate, weird kind of a listener. Here’s an example: It was my very first autumn, as far as I can remember. It was late at night, cold, slightly windy, completely dark and completely silent. I was in deep sleep. Suddenly, I felt something inside my ear. At first, I thought it was a fly, but my ear actually got wet. A raindrop from the roof literally fell into my ear. I woke up in panic. My parents had to move my bed, but since raindrops continued to fall, they placed a metal dustbin. All night long, I was captured by the sound of every single drop, at first falling in the empty dustbin and afterwards on the water surface that was formed.

This is an example from my sound environment during my childhood. Annoying and irritating but intriguing and exciting at the same time, for I perceived this incident as the first acoustic drama of my life: a three-dimensional ‘film’, with real sound effects, more effective than the (artificial) experience of an advanced surround sound system in a cinema hall.

So, what was so fascinating with these raindrops that turned out to be so significant in my future life as a composer? Most importantly, I became conscious of the sounds that surrounded me. I noticed that every moment of our life is synchronised with all kinds of natural sounds. It is something analogous to a landscape. But here, instead of having visual elements, we have sound elements. That is why we can speak of soundscapes. My life’s soundscape, years later, became an integral component of my music. 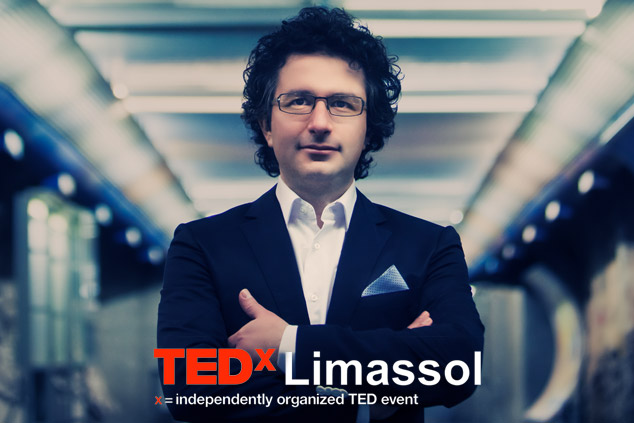 Back in 2003, I was invited by a major German car manufacturer at its Transparent Factory in Dresden to compose a work for orchestra and choir. As always, before I start working on a composition, I forget the role of the composer and become a detective – similar to Agatha Christie’s Hercules Poirot, who was by the way fond of Mozart and Bach. As a sound detective, I ‘investigate’ spaces and their acoustics and try to solve the ‘mystery’ of how to take advantage of them in the music.

In the aforementioned car factory there was a high glass-tower, used as a car show room. I found out that when the bell, the front part of the trumpet, was positioned close to the glass, an exceptional echo-like sound was produced. Similarly, I took advantage of a unique glass elevator. A trumpet player in the elevator produced a different sound effect while the elevator was moving, as a result of the kinetic function. Of course, I couldn’t move that huge tower and the glass elevator and place them in a concert hall, so I decided that the actual performance should take place in that space.

All looked inspiring and exciting, until I came across a problem: the space was indeed so huge, with several floors, which made it impossible for the conductor to be seen by the musicians so that they follow his hand signals. Luckily, I had a eureka moment, taken from a soundscape of everyday life: I thought of the car horn as a signal which can become the medium of communication between the musicians and the conductor; as it is exactly used by drivers in the streets to communicate with each other. Consequently, I used the car which was being manufactured there to send signals – sound but also light signals – to achieve the necessary coordination and synchronization. In this way, the cars and their horns – sound mediums from our everyday soundscape – were musically emancipated and became part of the music.

To make the use of our everyday life soundscape in the music a bit more explicit, here’s another example which exists in the same piece: We have all experienced the passing by of a car with the music in full volume. Most of us, often get annoyed and perceive it as sound pollution. In my case, I thought of using this noise in an eco-creative and eco-friendly way… Thus, I composed music to be played from the CD of the car. Each window was going individually up and down, controlled by a musician at the driver’s seat. The audience was seated around the car in a π-Form and – according to the listener’s position – there was a different acoustical perception of the sound coming out of the car’s loudspeakers.

Furthermore, to me it was important that the audience experiences a real soundscape, as if they were sitting inside a car. And here the raindrops from my childhood soundscape popped into the music. But this time, the roof of this high-tech space was not leaking, as my childhood house did. So, I recorded raindrops falling in the dustbin, measured their pitches in the computer and created a raindrop ‘melody’ and a raindrop ‘choir’. Above and below the audience, I put several loudspeakers to give the spatial dimension of the rooftop and ground, where the raindrops begin to fall and end. It felt as the audience was in a car, ‘driven’ by the sounds that surrounded it three-dimensionally.

Vehicles and their Musicality

After this experience I became fully aware of the musical potential in vehicles and composed a series of works that belong to the so-called “Vehicles-Cycle” in which bicycles, motorcycles, aeroplane and ship elements become immanent components of the music. Even an opera entitled “The Hunt” had six cars as protagonists, transformed into forest creatures. A short sequence, for example, utilises the sound of turn signals and hazard lights. At the same time, automotive lighting was imagined as if it was the blinking of eyes of these creatures in the dark.

The highlight of the “Vehicles-Cycle came” in 2011 with “Autosymphonic”, where an entire car orchestra consisting of 80 cars produces live music together with a full symphony orchestra, several choirs, 15 percussion groups and electronic sounds. Also, it engages high-end technologies and visual interactions, all accurately synchronised together with a per second signal (click track).

By the way, the 80 cars were played as percussion instruments by 120 pupils, who were especially trained one-year long to perform them as musical ‘instruments’. Even the cars were noted as instruments: when looking at the musical score the automobile tones have the same expressive Italian markings which are used for all other instruments in a traditional orchestra – for example pull the brake forte and con passione (which means with passion), or play the oldtimer’s horn dolce e con espressione (sweetly, with expression). Basically, sitting on a driver’s seat is similar to sitting in front of a drum-set: foot on pedal, left and right hand hold the sticks or handle the steering wheel, buttons and controllers around it. In total 800 natural car sounds were incorporated.

Let’s try to discover the musicality of our everyday life. Let’s go to the streets, at the airport, the train station, near muddy volcanoes, in a robotic or an acoustic microscopy laboratory, anywhere where we are surrounded by sounds and get challenged to interact with them. The only prerequisite is to have our ears open, detect and creatively handle with them. Do not perceive anything in an expected way.

Think of the dustman of your neighbourhood very early in the morning, who is a virtuoso performer of his job:

Altogether, the dustman is a brilliant soloist. But he is not performing alone. This depends on the weather conditions. If it is rainy, then raindrops fall on several street objects, like metal or plastic, hence different sound colours. This is reminiscent of the brass and strings sound of a classical orchestra. If it is sunny he is accompanied by the dawn chorus of the songbirds. 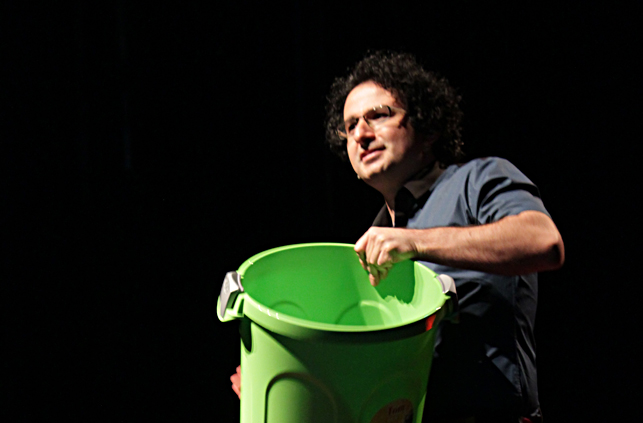 What I am trying to say – I urge you not to decode as noise any bothersome sound you receive. This is wrong. When two people audition the same source, they both listen to the noise for different reasons. One may be forced to listen unwittingly, as noise is everywhere present. Somebody else might listen closely because this same noise might have some answers to him or her; it might be meaningful. Thus, we come to the conclusion that somebody’s noise might be somebody else’s communication. For example:

In short, although we might all hear to the same soundscapes we listen to them in an entirely different way. Let’s find this out for ourselves; it comes out of our own soundscape biography.

In the case of “Autosymphonic”, the trigger was to create, instead of a ‘typical’ symphony orchestra, a peculiar orchestra: a car orchestra. It almost took me one year to cast over 120 cars of all types and eras around Germany: antiques, sport cars, tractors, busses, trucks, etc. In the end, 80 were selected, those with promising musical potential and individual sound qualities. Speaking about the cost, the most expensive Stradivarius violin was sold for 12 million Euros; this car orchestra was estimated 75 million. Nevertheless, it’s not about the cost. Most importantly, it’s the aesthetic and artistic value we give to things and what we make out them.

Natural sounds and everyday noises can be musically understood and transformed into a creative tool – for example:

In another piece of mine called “Staubzucker” (Powdered Sugar), everyday life sounds are prominent and act as a constituent part of the compositional process. In this way, natural sounds such as the raindrops in the very end, since they are imitated by guitarists on their instruments and with their voices (tongue clicks), become artificial; noise and junk are transformed into music and art; the wrong becomes right and the right becomes wrong.

Before closing, I’d like to make sure that you are now ready to awaken the artist in you and to limitlessly emancipate the ‘soundtrack’ of your life. Allow me to give you a final test through my work’s perspective: